Srinagar is the largest city and the summer capital of the Indian administered state of Jammu and Kashmir. It lies in the Kashmir Valley on the banks of the Jhelum River, a tributary of the Indus, and Dal and Anchar lakes. The city is famous for its gardens, waterfronts and houseboats. It is also known for traditional Kashmiri handicrafts and dried fruits.

The city is located on both the sides of the Jhelum River, which is called Vyath in Kashmir. The river passes through the city and meanders through the valley, moving onward and deepening in the Dal Lake. The city is famous for its nine old bridges, connecting the two parts of the city. 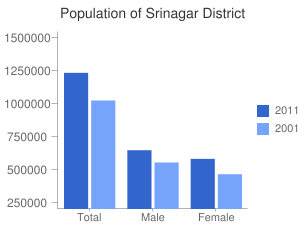 There are a number of lakes and swamps in and around the city. These include the Dal, the Nigeen, the Anchar, Khushal Sar, Gil Sar and Hokersar.

Hokersar is a wetland situated near Srinagar. Thousands of migratory birds come to Hokersar from Siberia and other regions in the winter season. Migratory birds from Siberia and Central Asia use wetlands in Kashmir as their transitory camps between September and October and again around spring. These wetlands play a vital role in sustaining a large population of wintering, staging and breeding birds.

Hokersar is 14 km (8.7 mi) north of Srinagar, and is a world class wetland spread over 13.75 km2 (5.31 sq mi) including lake and marshy area. It is the most accessible and well-known of Kashmir's wetlands which include Hygam, Shalibug and Mirgund. A record number of migratory birds have visited Hokersar in recent years.

Srinagar has a humid subtropical climate much cooler than what is found in much of the rest of India, due to its moderately high elevation and northerly position. The valley is surrounded by the Himalayas on all sides. Winters are cool, with daytime temperature averaging to 2.5 °C (36.5 °F), and drops below freezing point at night. Moderate to heavy snowfall occurs in winter and the highway connecting Srinagar with the rest of India faces frequent blockades due to icy roads and avalanches. Summers are warm with a July daytime average of 24.1 °C (75.4 °F). The average annual rainfall is around 720 millimetres (28 in). Spring is the wettest season while autumn is the driest. The highest temperature reliably recorded is 38.3 °C (100.9 °F) and the lowest is −20.0 °C (−4.0 °F).