History of Modern Healthcare in Kashmir

The advent of modern health care in pre-independence Kashmir is synonymous with Christian missionary activities.  We are indebted to Walter R. Lawrence, the famous Settlement Commissioner for detailing the traditional treatment methods before the advent of the missionaries. The following is an excerpt from his 'The Valley of Kashmir' published in 1895.
"

Even now the mass of the people believe in their own doctors, many of whom are men of considerable ability and experience. There are 300 Hakims or doctors in Kashmir, and as a rule the profession is hereditary. Their system is based on the Greek system of medicine, and I have known cases in which some of my subordinates have derived great benefit from the skill of the Kashmiri Hakim. The Hakims have a considerable knowledge of herbs, and their herb-collectors are the shepherds, who spend the summer on the high mountains where the most valued plants are found. The Hakim charges a wealthy patient eight annas a visit, but he makes some money by compounding medicines.

The Hakim does not dabble in surgery. He will mark with a pen the vein which is to be opened, but a barber must be called in to operate. There are over 1,900 barbers in the valley. If leeches are to be applied a special man is sent for.
Such samples as the Hakim does not obtain from the shepherds are bought from the druggists, of whom there are 159 in Kashmir. The Hakim never attends midwifery cases; special women, of whom there are seventy-four; dispose of these cases.
Besides the professional Hakims, there are many wise women ' in the villages who have considerable knowledge of the properties of herbs, and it is a remarkable fact that nearly every peasant seems to know something about the medicinal powers of plants. The sovereign remedy of the Hakims for all very serious cases is the chob-i-chin (Smilax China), a kind of root brought from China and administered internally.
The people believe greatly in the efficacy of amulets given by Pirs. They cure all diseases. The amulet is either fastened on the right arm, neck or turban, or is put in water and the water and ink of the writing drunk by the patient, or is burnt and the smoke inhaled by the sick man. This inhalation brings dreams, and the dreams must be told to the Pir; who at once knows what is to be done. The chief principle in the treatment of the Pir fraternity is that illness is caused by evil spirits, and that a talisman suitably prepared, with the name of the patient's mother on it, will drive out any devil. "
It was this scenario that existed before western treatment concepts were introduced in Kashmir by the medical missionaries.

The history of modern health care in the pre-independence era in Kashmir is synonymous with Christian missionary activities. While their motives were admittedly of a missionary nature, yet the pioneering role of the Kashmir Medical Mission cannot be denied. 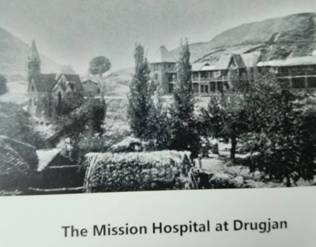 The founder of the Kashmir Medical Mission was the Rev. Robert Clark. His wife, a qualified medical specialist, has the distinction of introducing the western concept of medicine in the valley. On his return from a missionary tour in Kashmir, Ladakh and Skardu, Mr Clark received support for a Medical Mission in Kashmir from a group of leading civilians and British officers, including Sir Robert Montgomery, then Lieutenant-Governor of the Punjab. A fund of fourteen thousand rupees was raised to set up a Medical Mission in Kashmir. The Lieutenant-Governor sent an invitation to the Church Missionary Society (CMS) and made a personal donation of a thousand rupees to the proposed Kashmir Medical Mission. Dr William J. Elmslie, the first medical missionary appointed by the CMS, arrived in Kashmir in 1865. He was the son of an Aberdeen cobbler and had obtained M. A. from Aberdeen University and M.D. from Edinburgh University.
During the summer of 1865, Dr. Elmslie treated about 2000 patients. At that time no European was allowed to remain in the valley in the winter. On his return in 1866 Dr. Elmslie was unable to obtain adequate accommodation due to strong state opposition to the missionary component of the CMS medical activities. However, displaying a true Scottish never-say-die spirit he successfully treated 3365patients in a single tent serving both as OPD and IPD. Dr. Elmslie revisited the valley of Kashmir each summer till 1869 and treated thousands of patients including the victims of a widespread cholera epidemic in 1867.
In 1870 the Rev. W. T. Storrs manned the Kashmir Medical Mission. In 1872 Dr. Elmslie returned to find Srinagar in the throes of another severe cholera epidemic. His own health was affected and he died on the return journey in the autumn of 1872.
Dr. Elmslie's successor, Dr. Theodore Maxwell, was politically well-connected and was able to resume the activities of the Medical Mission in 1874 under favourable conditions. Official opposition was withdrawn and Maharaja Pratap Singh granted a site for a hospital at Drugjan on the Rustam Garhi hill. A small building was constructed at State expense where Dr. Maxwell worked for two years till his own health broke down and he was compelled to leave India.

Dr. Maxwell was succeeded by an Indian Christian doctor; John Williams, and then by Dr. Edmund Downes in 1877. Dr. Downes, who had resigned from the Royal Artillery for medicalmissionary work, worked tirelessly for six years till he in turn was forced by ill-health to retire in 1882. By personal contributions and donations fromfriends in England, Dr. Downes erected the Mission Hospital with facilities for more than a hundred in-patients. He also obtained permission to stay in Kashmir in winter.

From 1877-1879 Kashmir was afflicted by a severe Dr. Arthur Neve arrived in Kashmir in March 1382 followed in 1883 by the Rev. J. H. Knowles. In 1886 Dr. Arthur Neve was joined by his brother; Dr. Ernest F. Neve in Kashmir. Later their sister Miss Nora Neve, became Superintendent of Nurses at the Mission Hospital.

In the year 1899, 35,000 visits had been registered at the hospital, besides patients seen in the villages while trekking through the countryside. Nineteen years after his arrival, the Kaisar-i-Hind gold medal was conferred on Dr. Arthur Neve for Public Service. During this period a number of catastrophes, both natural and man-made, hit Kashmir. In 1885 a great earthquake occurred and five serious cholera epidemics with at least forty thousand deaths each year occurred in 1888, 1892, 1900, 1907 and 1910.
At that time practically the whole population of Kashmir contracted smallpox in childhood. It was described by Dr. Neve as the most frequent cause of total incurable blindness. He wrote that from smalipox and other causes, fifty per cent of children in Kashmir were said to die in infancy.
An epidemic of plague with over 95 per cent mortality was reported in 1903. The disease gradually died out after lingering in some isolated villages near Wular Lake.

CEZMS efforts were started in Kashmir in 1886 by Mrs. Rallia Ram as an honorary worker of the society. Dr. Fanny Butler was the first student enrolled at the London School of Medicine for Women and in 1880, the first woman medical missionary sent to India. She had been inspired to travel to India as a medical missionary by an appeal for medical women issued by Dr. Elmslie just before his death.
In May 1888, Dr. Butler reached Srinagar at Dr. Neve' s request. The CEZMS rented a dispensary in the city and named it the "Zenana Shifa Khana". Five patients were treated on August 5th, 1888, the opening day. By the end of the year five thousand patients had been treated with thirty-five in-patients admitted in a makeshift hospital in the adjoining house. Impressed by the CEZMS activities, Mrs. Isabella Bishop donated 500 pounds to build a new thirty-bedded women's hospital as a memorial to her husband. In June 1890 the John Bishop Memorial Hospital was opened by the Bishop of Lahore at the Mandir Bagh. Next year the flooded Jehlum damaged the hospital and its work had to be transferred to temporary premises near the Dal Gate.
Kashmir Medical Mission, 1893 (average of past five years)
Mission Hospital Srinagar (Eighty beds),
8,688 out-patients
853 in-patients
2,086 minor surgical operations
503 major surgeries,
Temporary winter branch, (two months) 1,469 new patients in a total of 2,
Villages (90 days total) 5,167

In 1892 a second flood wrecked the John Bishop Memorial Hospital completely and it was rebuilt in the town of Anantnag on land donated by the Maharaja at the request of Lord Frederick Roberts, Commander-in-Chief of the British Army. The first in-patient was admitted in June 1902. The doctor in charge was Miss. Minnie Gomery, M.D and her Nursing Sister colleague was Miss. Kate Nownham. 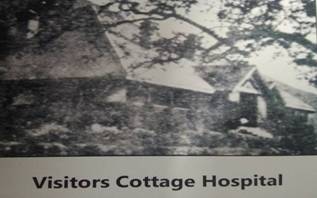 The Church of England Zenana Missionary Society Hospital was established at Rainawari in 1908. Elizabeth Mary Newman was bestowed the title of the 'Florence Nightingale of Kashmir' by Tyndale-Biscoe for her work at this hospital. The CEZMS Hospital underwent extensive upgradation in 1936.

In 1891, a separate State Leper Hospital was established by the State under the management of the Church Missionary Society. About twelve acres of land on a peninsula projecting into the Nagin Lake and £300 for a thirty-bed hospital and one year's maintenance were granted by the Maharajah. By 1911 the number of patients had reached one hundred.
The St. Joseph's Mission Hospital was established in the mid 1930s in Baramulla by the Mill Hill Missionaries.
In 1891 the Maharajah of Kashmir also donated land and a sum of Rs. 1500 for setting up a Visitors Cottage Hospital exclusively for white people at the foot hills of the Shankaracharya Hill.

Possibly as an indirect result of the work of the Kashmir Medical Mission, the first Kashmir State Dispensary was started in the late 1860's. This was to be the forerunner of the State Medical Service. In 1895, Walter Lawrence reported that the State maintained "one excellent hospital in Srinagar and six dispensaries, three of which are situated in the districts"
The State Hospital, situated at Hazuri Bagh, was managed by Rai Bahadur Dr. A. Mitra as its first Chief Medical Officer. He later served as Public Works Minister on the Maharajah's State Council. It was initially known as the Maharaja's Hospital and later as the Sadar or State Hospital. British Residency Surgeons acted as Superintending Surgeons to this Hospital.
Of the diseases treated in the State Hospital and the dispensaries, the following were the most common: fevers, syphilitic diseases, rheumatic affections, nervous system diseases, eye diseases, respiratory diseases, dyspepsia. diseases of the digestive system, connective tissue and skin diseases. Venerea` diseases formed 25 per cent of the surgical cases.
Walter Lawrence also reported that excellent sur,a instruments were being manufactured in Kashmir and instruments in use in the State Hospital were manufactured

An X-ray plant was installed in the State Hospital in 1913-14 and a dental wing was opened in January 1930.

In 1929 a Sanatorium for patients suffering from Tuberculosis was set up in Tangmarg.
In 1940 several important schemes to provide better health care facilities were introduced in Kashmir, including the construction of a major hospital comparable with the best medical institutions. The estate of Hadow Mills Carpet Factory was acquired for the purpose, and the foundation stone of the State Hospital (SMHS) was laid by the Marquis of Linlithgow, the then Viceroy of India on October 15, 1940. The hospital was inaugurated by his successor, Lord Wave!' on 11th of October 1945.