Sh. AMARANTH JI YATRA is an annual religious event of utmost state and national importance. Not only is it sacrosanct but a traditional epitome of co-existence of diverse communities living in harmony and exhibiting unity. Located in Himalayas at a height of 3888 mts. (12756 ft.) the cave has been worshipped from times immemorial in spite of rough difficult and hostile terrain. As Himalayas have remained source of attraction to mankind since its existence the humans also learnt to conquer them. Especially when great avatars embraced these peaks for worship they became symbol of love and peace. Trekking this destination for attainment of solace and washing away sins pulls up lakhs of Yatris every year for Darshan and Pooja at this Holy Cave. The two routes from North and South (Sonmarg and Pahalgam) used to climb the cave are not only difficult but also not physically fit for arduous climb. Though the yatra is held in peak summer season but because of very high altitudes the weather remains unpredictable and even challenging as temperatures can fall so rapidly that is deleterious to health. Thus the bigger challenge for State Government and it's departments is to provide facilities and create conditions that can help alleviate all difficulties and make this Yatra easy. Department of Health has been striving and making all efforts to keep all Yatris in good health enroute and to provide them all necessary medical attention. It is done by establishing medical camps equipped with modern infrastructure all along the routes on both sides. The doctors and paramedics are vigorously trained in high altitude medicine at our regional institute especially for this Yatra. This has helped in decreasing mortality and morbidity drastically. Our staff is fully trained to handle medical emergencies like AMS, HAPE & HACE that frequently occur on such expeditions. We did thrombolysis this year on a patient at one of the base camps which won even international applaud. We for the first time used HYPO bags (hyperbaric chambers) to transfer critically sick to descending camps. All our endeavours are improved and fine-tuned every year to further boost health care facilities. We will keep on striving hard to make every yatri accomplish his yatra in a very good health. We will help them to complete their spiritual journey in the best spirit of health. All these goals could not have been achieved without support of J&K Govt. and Sh. Amaranth Nath Ji Shrine Board who leave no stone unturned to help us provide care and hospitality to the traditional Kashmiri Standards. Together we are building safe religious tourism and together we shall make a difference that will bring more and more people to serene Himalayas for spiritual well being. 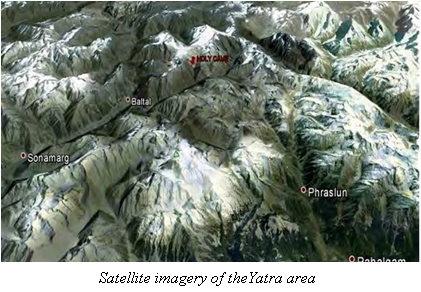 pilgrimages and public events and this mandate includes doing the same for Sh. Amarnath Ji Yatra which is annual event during which a multitude of pilgrims from various parts of the Country visit the Holy Cave located in the mountains of NorthEastern part of Kashmir Valley.


Over the years, the number of pilgrims has increased exponentially and so have the requirements of medical facilities for the same particularly since 2010. During the earlier years, the medical facilities provided by the Department were basic in nature and consisted of interim medical camps established at limited locations with bare minimum staff as well as drugs. Due to active efforts of the Government, the Yatra began to be regularized to cater to the rush of the pilgrims; the Department also upgraded its facilities to live up to the requirements of the pilgrims.

Ganderbal over treacherous terrain. The distance from Pahelgam to Holy Cave is 34 kilometers and from Baltal to Holy Cave is 14 kilometers. The track from Pahalgam is traditionally completed over a period of 5-6 days and from Baltal, due to the shorter distance, a tendency has developed to complete the visit in a single day. The Holy Cave is situated at an altitude of 13500 feet above the sea level and is thus a high altitude destination for the pilgrims and entails the exposure of the pilgrims to medical conditions associated with this altitude.


As the number of pilgrims travelling to this destination increased to the current level, the mortality and morbidity arising out of this pilgrimage increased proportionately. The Hon’ble Supreme of India taking cognizance of the reports of this excessive mortality intervened

During the year 2012 and issued directions to ensure the safety of the pilgrims and creation and provisioning of facilities for the intending Yatris. The directives were addressed to all the concerned Departments importantly the Department of Health who were directed to design an appropriate plan by which the mortality and morbidity could be contained.


Acting upon the directives, the Directorate of Health Services, Kashmir devised a comprehensive strategy for providing of appropriate medical services during the course of the Yatra. Accordingly, a committee was constituted headed by the Director Health Services, Kashmir which included Public Health Specialists and Clinicians. The strategy consisted of the following:

1. Advocating the adoption of minimum fitness protocols for intending Yatris so that    high risk persons are restricted from embarking on this Yatra.

2. A massive upgradation of the medical facilities which would include procurement of    high tech equipment suited for adverse high altitude conditions. 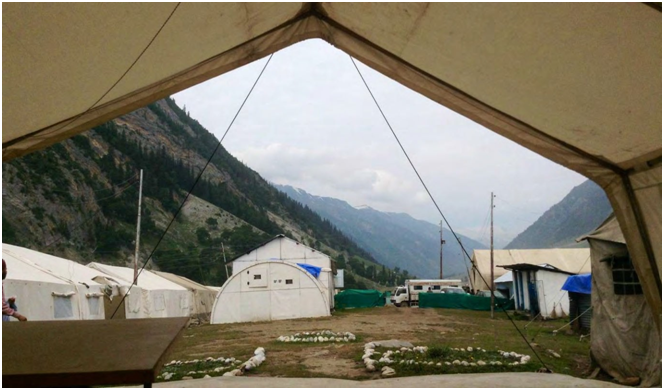 4. Adoption of the specific directives of the Hon’ble Supreme Court regarding the medical facilities for the Yatra which included setting up of Medical facility at every 2 kilometres of the route, deployment of doctors from other States, establishment of Mortuary facilities and others. 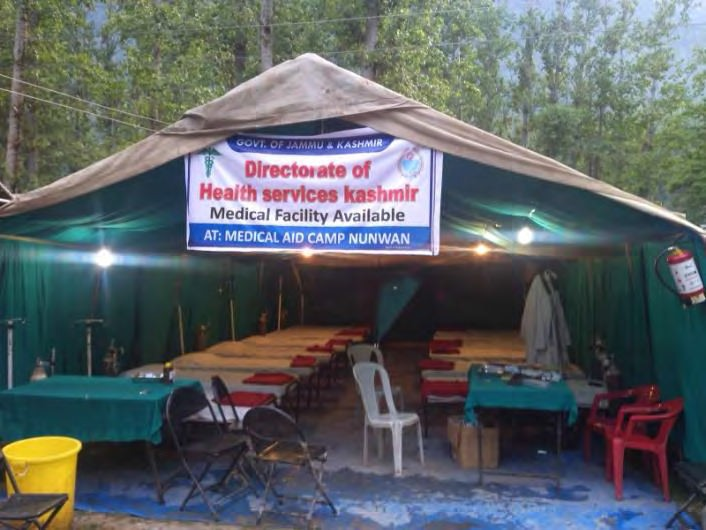 Taking lessons from the previous experiences and the conduct of similar pilgrimages and tours to high altitude tourist and pilgrim destinations, in particular the conduct of the Kailash Mansarovar Yatra, the importance of filtering the patients by setting minimum standards was campaigned. The Government then set up a committee consisting of eminent Clinicians, Public Health Specialists and Administrators to formulate a mechanism of effective screening. On their recommendations, a Compulsory Health Certificate (CHC) was designed which was made mandatory for registration of any intending pilgrim. This step was among the main reasons for the success at reducing the mortality associated with Sh. Amarnath Ji Yatra. 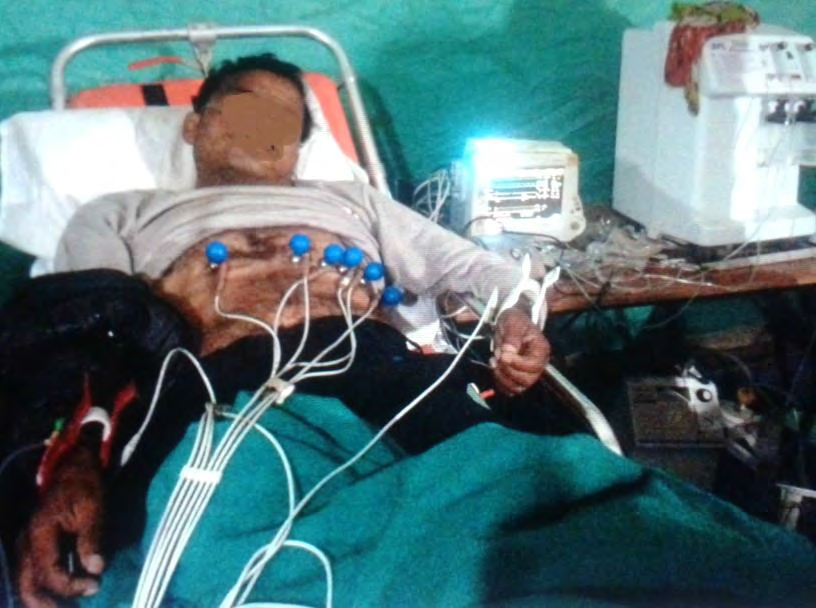 The major challenge faced by the Directorate of Health Services, Kashmir was the upgradation of the Health facilities to cater to the emergencies that report to the medical camps during the course of Yatra. A study of the contemporary Emergency Room procedures and practices was conducted and a list of equipment was prepared that was deemed necessary for following the current medical protocols. The equipment was to be housed in appropriate conditions for which necessary infrastructure was to be put in place. Also, as some of the equipment that was to be procured was new to the staff, they had to be trained in handling the same. As a run-off, it was also hoped that the Yatra would serve as a benchmark for up-grading the emergency sections of the peripheral hospitals. 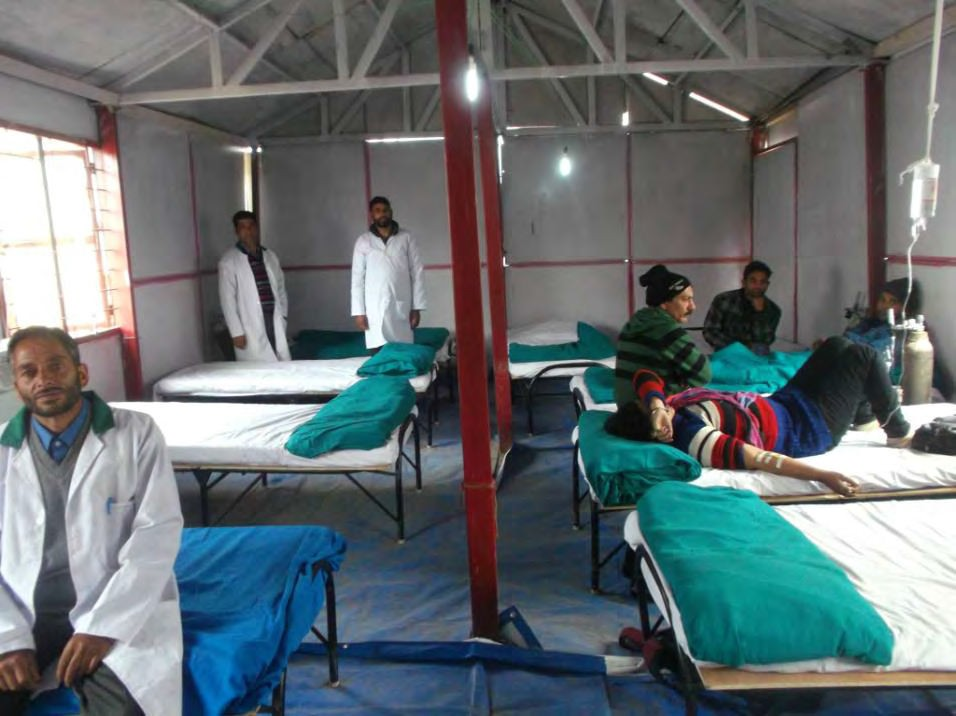 A three tier healthcare system was conceptualized to deliver healthcare facilities, each having a minimum set of manpower and equipment backup. It was perceived that specialized facilities would need to be set up at strategic locations at near equitable distances and in consideration of the pilgrim night halt options and were thus set up at Baltal, Chandanwari, Holy Cave, Sheshnag & Panjtarni. These designated 15 bedded Base Camps hospitals had the facilities for consultations in Medicine, Surgery, Orthopaedics, Cardiology and Critical

Care which was backed up with all required equipment, diagnostics, nursing and referral facilities. A second tier of Medical Aid Centres was created which were manned by trained Medical Officers and had basic diagnostics and treatment facilities including for the treatment of emergencies. They were set up at 10 locations along both routes focusing on the areas where incidences of morbidity were high.
A third tier of Emergency Aid Centres was created which were mostly located to keep in conformity with the Hon’ble Supreme Court’s directions of creating health facility at every 2 kilometers distance along the routes leading to the Holy Cave. These Centres on the analogy of the Sub Centres at only the basic First Aid facilities but were manned by a trained Medical Officer. The Directorate was able to procure thematically insulated Fiber Reinforced Polymer based Prefabricated Shelters for the first time among the Departments that set up facilities along the routes of the Holy Cave. Equipment including defibrillators, cardiac monitors, hyperbaric oxygen chambers, pulse Oxymeters, automated CPR machines, transport ventilators, portable oxygen concentrators, etc was procured. As these machines would require power supply to function, generators were also procured. 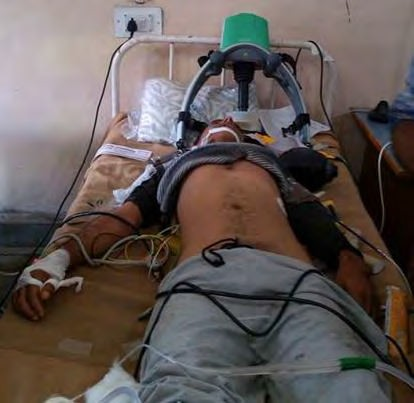 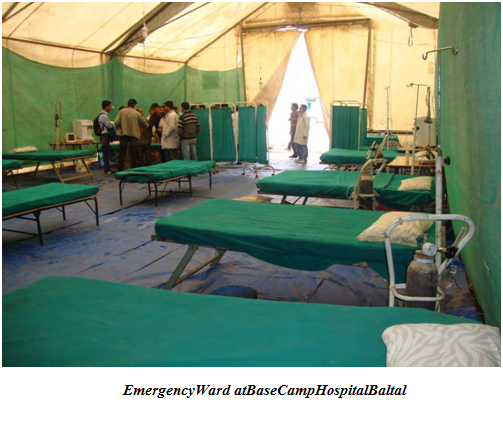 As the minimum standards for manpower were set, it became apparent that supplementation of the staff of the Directorate of Health Services, Kashmir would be required. Keeping this in view, staff from Medical Colleges, other Directorates and other States was requisitioned from the Government. A detailed manpower deployment plan was formulated taking into account factors like specialization, experience, physical fitness, motivation, etc of the nominated staff. An effort was made to minimize the effect on the routine functioning of the institutions of this Directorate as well as the Medical Colleges. With a view to keep the morale of the staff high and to keep them motivated, specific periods of rest were provided to the staff alternating with the periods of their being on active duty. Additionally, an incentive in the form of Hardship Allowance was sought from the Government and was later disbursed amongst them. Appropriate accommodation as was the directive of the Hon’ble Supreme Court was also provided to all the deployed staff, based on the feasibilities at each site of their deployment

For effective implementation of the plan, a Nodal Officer for the Yatra was designated and a Yatra Control Room was established at the Directorate of Health Services, Kashmir. The officer designated was intimately connected with the initial plan that was formulated by this Directorate and which was approved by the Government of India. All the activities were continuously monitored and midcourse changes were done by this Control Room. Among the activities circulation of protocols in terms of clinical and patient management processes were circulated. Advisories that included press and mass media campaigns were carried out by the office

The procurements that were necessitated for the purpose of the Yatra were expedited by the office. Trainings in High Altitude medicine and equipment handling were organized with the purpose of having the Manpower capable of handling the morbidity that arises due to the exposure of un-acclimatized pilgrims to the high altitudes encountered during the Yatra. In order to streamline the financial and logistical management related to the conduct of Yatra, detailed guidelines were prepared, circulated and scrutinized by this office which has successfully brought down the expenditures inspite of an increase in the level of the facilities provided. Apart from the public, administrative and legal communications the office was also entrusted with coordinating with other Departments and the Shrine Board for an effective implementation of healthcare strategies. The Hon’ble Supreme Court specifically designated the Department of Health to cater to the requirements arising out of the deaths of Yatris and for this purpose, the Department established mortuaries at Sonamarg, Pahalgam and Pantha Chowk. Staff was trained in handling the post mortems as well as in embalming techniques.


The Directorate of Health Services, Kashmir has prioritized the conduct of Sh. Amarnath Ji Yatra. A concerted effort has been made to make all possible efforts to reduce the mortality and morbidity associated during previous years with the Yatra. A successful beginning has been made which are explicitly expressed by the decreasing mortality. A study on an increase in this year’s mortality has suggested adverse climatic and track conditions which have been taken up with concerned quarters who are pursuing this serious issue and it is anticipated that this Yatra will be a safe and secure journey for the pilgrims from now onwards 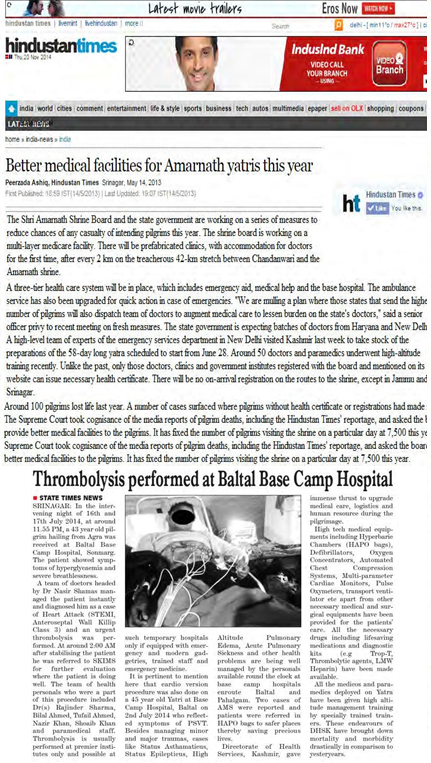 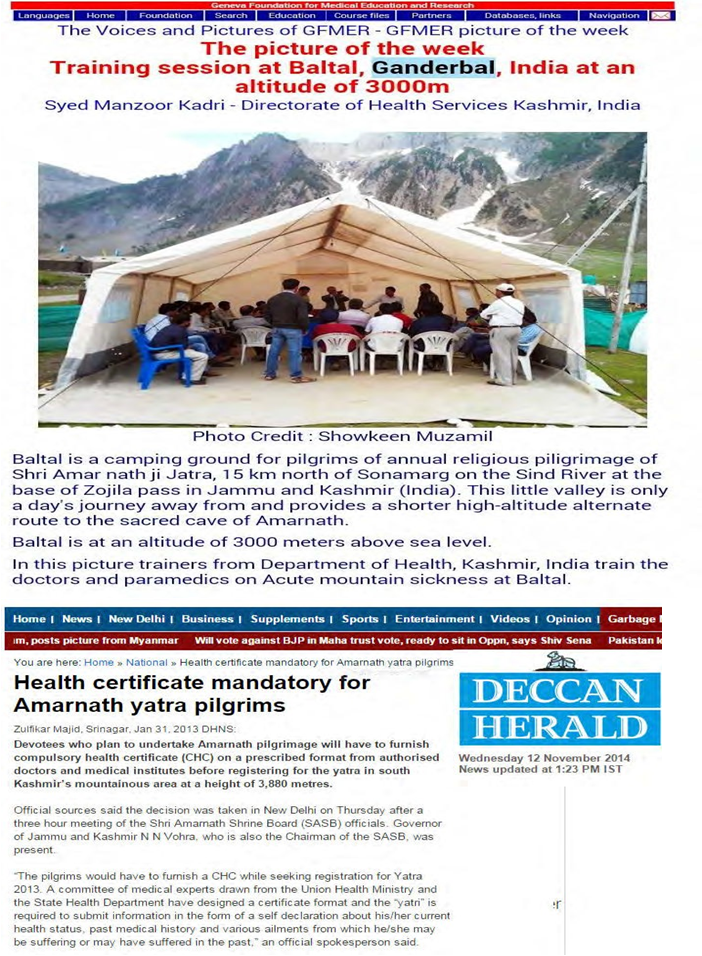