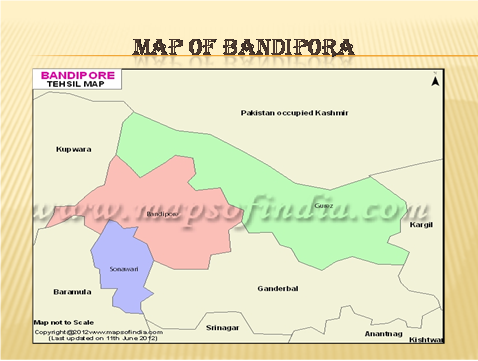 District Bandipora at a Glance

District Bandipora has been created as a separate District from the erstwhile District Baramulla vide Govt. Order No: 947-GAD of 2006 dated 31-07-2006 and District Health Office started its functioning from April 2007. . The Population of District is about 392115 which consist of 16% of Tribal population and more than 69% population residing in rural areas.

Bandipora District is one of the newly created eight Districts and is spread over an area of 398 Sq Kms. It is bounded in the west by District Kupwara, in the south is District Baramulla & on the north side bounded by LOC. Bandipora is about 55km from Srinagar. The topography of the District represents a mix of beautiful mountains and streams offering tremendous potential for developing scenic adventure tourism. River Kishen Ganga flows through this District which has vast potential for generating hydro- electricity and also marine life. Nallah Madhumati and ARIN are famous for Trout fish.

Bandipora all along used to be a well known town which almost served as a port in old times. It used to be one of the important places of the old kingdom known as KHUIHOM. During Mughal period there were two ports which were means of communication between Srinagar & Other central Asian States for commercial purpose. These ports were ALOOSA GATH and NASOO Gath. For about a century, ALOOSA remained headquarter for Pargana KHUAIHOMA. The route to central Asia traversed through ALOOSA and Once Mughal Emperors conferred the area of KHUAIHOMA asJAGEER to the family of Bandeys in Srinagar, since then the area has come to be known as Bandipora .The Bandipora in ancient and medieval times as KHUAIHOM has three routes which used to connect Kashmir with China, Mongolia, Kirgistan, Afganistan, Turkamania and Iran. Bandipora is known as Gateway of Gilgi and Astore. Bandipora is situated around the North shore of the Wular Lake, in front of mountains as an edging of sloping ground Inhabited by villages.

Bandipora is the principle town and its District headquarter, having 184 villages out of which 03 villages are un-inhabitated ,03 Tehsils namely , Gurez, Sonawari , Bandipora with 36 Patwar Halqas in 8 Naibats, 4CD blocks, 133 panchayats, 05 Education Zones, 03 Medical blocks, namely Bandipora Hajin & Guraiz . The cultivable land available is 30985 Hectares and usually a single crop is grown. The cultivable area is under orchards, cereals and paddy land. The Wular Lake, largest of all fresh lakes in Asia lends further attraction to this District and provides economic activity to large chunk of population

Though Kashmiri is the main language spoken in this District however, Pahari & Gojari are also being spoken in the upper areas of Tehsil Bandipora. Sheena (Darad) is the local language in Guraiz -Tulail areas. Agriculture is the main activity of the people. However a sizeable population residing on the banks of Wullar is dependent on catching and marketing fish,Nadru, Singhara(water Nut) and Pachi (used for famous Kashmiri Mat-Wagu) - Wullar products ,are sources of income for the said population.

Guraiz, presently a Tehsil and Sub- Division is a valley lying to the North of Kashmir, shaped some what like the basic and the western arm being traversed by the kishen Ganga River and the Eastern arm by the Burza Nallah. The valley is surrounded on every side by lofty peaks and mountain slopes. The south east end of the valley is occupied by superb peaks of Pir Panchal range dividing the Tulail valley from Guraiz which provides attention for adventure trekking. The entire area has strategic importance as beyond Razdhan pass, the complete west and Northern borders of the state run along the line of Control. 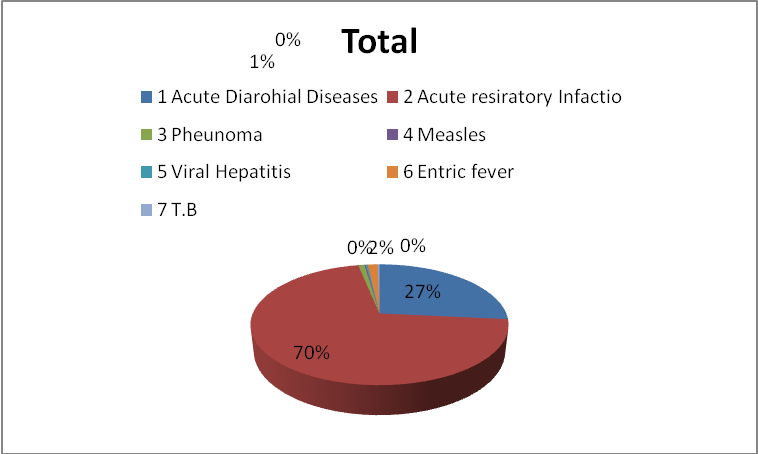