Shopian is a historical town, and has gained importance from the time of Mughal rulers.

It was previously known as 'Sheen-e-van' meaning 'forest of snow'. Shopian was one out of six Wazarat Headquarters in Kashmir from 1872-1892 A.D. The District is situated in the laps of foot Hills of Pirpanchal range and most of its area is Hilly Terrain. The District is having an area of 30,741.6 hectares. It is at a distance of 51 km from city Srinagar. Shopian has been an ancient Town of Kashmir, which among other factors in the past has historical importance, since it is situated on the ancient imperial road commonly known as Mughal Road. Shopian has the honour to had Imam Shahi Hamadan entered via it into the Kashmir valley to spread the message of Islam. Shopian Town-the District Headquarter is situated at a distance of 51KM from Srinagar & 20KM from Pulwama on 2146Mts above the sea level. It has decades of old road connectivity with Anantnag as well as Kulgam.

Presently the District Shopian having two Assembly Constituencies consists of nine Tehsils, eight CD Block Shopian & a part of Block Keller, One Municipal Committee with 13 Wards, 43 Patwar Halqas & 231 inhabited villages. As per census-2011, the total population of the District is 2.66 lacs including 15% of ST population. About 95% of the population lives in its rural areas. About 62.49% of the population was found literate.

The district has the privilege of having the "Holy Relic: of Prophet Mohammad (SAW) at khankah Pinjoora. The district is known as Apple Bowl of the state as it is famous for Horticulture Sector.

The district possesses tremendous scope for expansion of fruit industry under different schemes which can boost the economy not only of this district but the whole state.

The District with lush green forests especially in the areas like Sedow, Hirpora & Keller is rich in scenic beauty. Development of these villages/areas as tourist villages will boost the tourism in the District for economic development of the people. 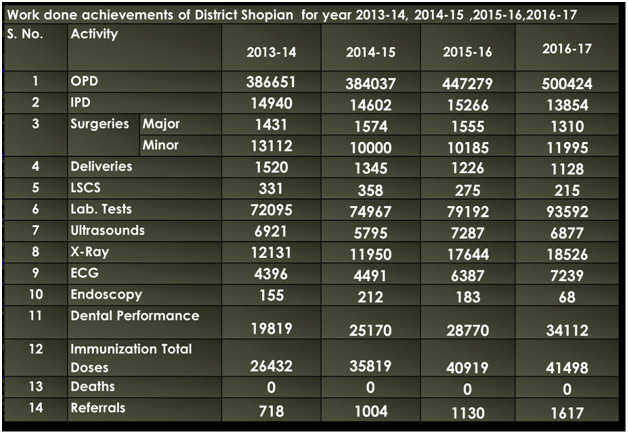